The Soul of Old Hanoi

At first glance, Hanoi’s Old Quarter appears as a dirty, crowded and chaotic area. But if you take time and explore it more closely, you might find its charms hidden beneath the ugly appearance. From the sound of the street vendors, the fragrance of milky flowers to simple figurines made of glutinous rice powders, all these small things represent the eternal soul of Hanoi.

Tucked between the Hoan Kiem Lake, the Long Bien Bridge, a former city rampart and a citadel wall, Hanoi’s Old Quarter has a history that spans more than a thousand years. Started as a snake and alligator-infested swamp, it evolved into a crafts district in the 11th century when the Vietnamese reclaimed independence and King Ly Thai To built the Imperial Citadel of Thang Long (the old name of Hanoi). Soon, skilled craftsmen migrated to the city and artisan guilds were gradually formed by people originating from the same village and offering similar services.

The craftsmen worked and lived together in a specific area, creating a cooperative system for merchandise. Finally, they gave the name of their crafts to the designated streets of the quarter, such that most streets acquired names beginning with hàng (Wares), for example, Hàng Da street (leather wares street) or Hàng Thiếc street (tin wares street). While several of these streets are still specialised in the trade that gave them their names, others have been replaced with another type of wares to meet the demand of modern-day customers. For instance, Hàng Buồm street (sail wares street) no longer sell sail equipment. Instead, it has become dominated by traditional cakes and candies.

While wandering around Hanoi’s Old Quarter, you will encounter at least one or two street vendors. Even though it isn’t a feature unique to Vietnam, street vending is still an essential part of city life. No one has ever known what time or age they did appear. The only thing we know is that they serve as an informal yet extremely important agent in the local economy. 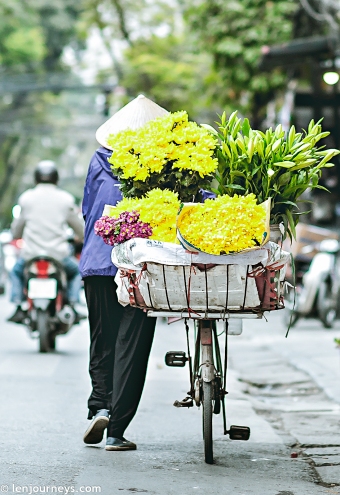 Bargaining is virtually a must 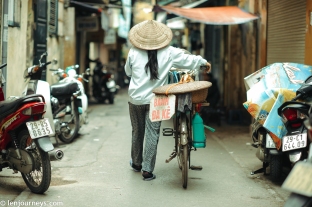 Wandering through the alleys

Strange as it may sound, street vendors do have stable trading relationships and frequent customers. Quality is, therefore, preserved to an acceptable extent and local people who shop for fresh grocery can enjoy the luxury of having products delivered to their door daily without any extra cost. Products vary as widely as needs call for, with vegetables, fruits, flowers and home-made dishes are the most common goods. Nevertheless, bargaining is virtually obligatory, especially if you are a tourist.

As you continue exploring the Old Quarter, you might come across some tò he, one of the rare surviving traditional toys of Vietnam. Amid the bustling scene of the Old Quarter, it’s easy to miss these colourful toy figurines because only a handful of craftsmen can still produce them. Made of glutinous rice powders, tò he is edible and can be kneaded into any shape and form, ranging from flowers, animals to characters in folk stories or cartoon. It is considered a cultural ambassador of Vietnam because it represents the skill and imagination of the Vietnamese craftsmen.

This site uses Akismet to reduce spam. Learn how your comment data is processed.

Unless otherwise indicated, all materials, including texts and images on these pages are copyrighted by LEN Journeys. All rights reserved. Therefore, reproduction, modification, storage in a retrieval system or retransmission, in any form or by any means, electronic, mechanical is strictly prohibited without prior written permission.
%d bloggers like this: